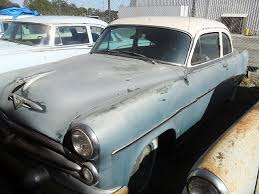 My parents married a year out of high school and my older brother was a “full-term premie”, if you know what I mean. Their first home was in an attic next to the tracks in Dolton Illinois. Dad had an entry level job at US Steel’s South Works located where the fetid Calumet River slumped into the magnanimous Lake Michigan. He earned $1.20 an hour before the layoff. So what do young dirt-poor, attic-dwellers do when facing poverty? You guessed it. I got conceived.

So Dad drove cars he found in junkyards. But that fit because we lived in Industrial South Chicago. The region sits on a flat continental divide of poorly drained marshy black clay. Junks, slag heaps and rusting waste were located in town right alongside taverns, factories, churches and schools. My unemployed Dad earned a buck in the junkyards removing parts requested over a greasy phone in an unheated shack surrounded by slick puddles and mongrel dogs. His overalls would be covered in oily mud. He enjoyed it and was well liked. Knowing his fiscal situation, the owners would let him drive a running wreck. This is how he got the car that was my first ride. It was the remains of a 1954 Dodge Coronet.

It was junked for good reason. It needed a radiator. It needed a transmission. It needed carburetor work. The electrical wiring had shorts in it. It leaked. The Dodge was missing a taillight and the left front turn signal. It needed shocks, brakes and a front end alignment. The exhaust was gone. It rolled in on its own power into Mr. Wietvold’s junkyard to die and be parted out. However, before it would be euthanized, it would serve as my inaugural car ride.

Blue Island is an ancient landlocked island rising above the flooded South Chicago region. Early German and Dutch settlers built the town on it to avoid the mud and to turn the clay into bricks. I was born in the hospital located at its crest. To reach his new son and wife, Dad had to get the Dodge from Dolton up to Blue Island. Mom always told me that she knew when my father was coming to see us because she heard the unmuffled Coronet trying to get up Western Avenue.  Today police would have not allowed this car on the road and I can’t imagine any hospital staffers letting a newborn anywhere near it, let alone ride in it.

Being born and raised in Chicago, Mom never needed to learn how to drive. Which was not a problem since the Dodge was undependable and would have stranded a young mom, a toddler and an infant without warning. Until the exhaust was replaced by my dad parking it over a ditch and using junk parts wired together, the windows had to remain open to prevent asphyxiation. Thanks to his work at the yards, Dad pieced the Coronet together without buying anything. That summer, he tried peddling a Good Humor ice cream cart around town, but he finally succeeded in getting an entry-level job at the Great Lakes Screw Company.

Dad kept the car running for the year he was officially unemployed. He told me a few times that once he licensed it under his mother’s name and got a title for it, he was able to keep it running until he got a car loan for a new car. He thought pretty highly of the old Dodge and there is a photo of me as a newborn, being held by my mother, in front of it. He told me it was a good car and did its best to serve the family during that hard time. He always remembered it fondly, as did my mom. Being unemployed was hard so he held fast to his next job until he could no longer work due to the cancer that ended his life. He taught me to never waste a thing. And being my father’s son, I love digging around junkyards too.