Three years into the ownership of my ’09 Tacoma I was starting to get a little bored. There was nothing at all wrong with the truck; it suited my needs well, but something was missing. I needed a beater to spice things up, but my frugal ways prevented me from buying one without a financial rationale. In early 2012, I got a financial reason in the form of a new job that required frequent highway travel. So I bought this uncomfortable little thing to save gas money by not buying any gasoline at all. I converted it to run on propane, which at the time cost almost half as much as regular gas. 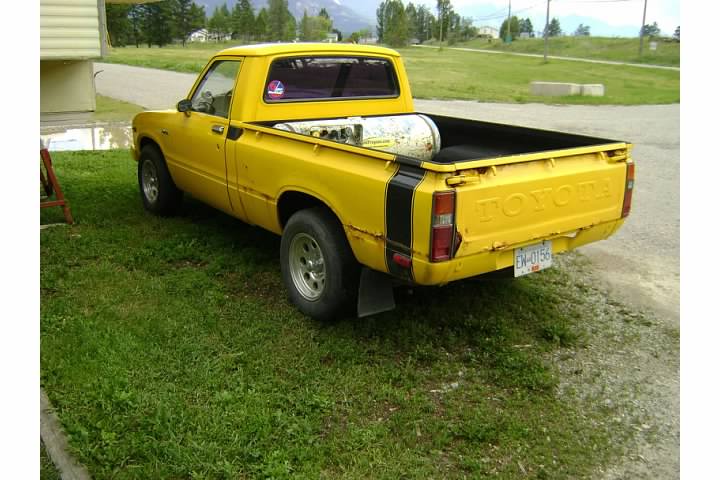 I have been fascinated with propane powered vehicles for some time. With the exception of some taxi cabs I had seen when I was younger, most propane vehicles were confined to heavier duty pickup trucks, presumably to save on fuel costs when feeding a big block motor. But rarely were conversions made on smaller vehicles purely for maximum gas mileage. While an old VW diesel would likely have cost just as little to run, I wanted to do something different so I did my research and figured that an old Toyota pickup would be ideal for my needs. Ever since my first Toyota Pickup met an early end, I had pined for another and now I had my chance.

I found DIY propane kits at gotpropane.com, which are intended for off-road use. Off-roaders have been using propane for decades as it doesn’t slosh around in carb bowls at extreme angles like regular pump fuel does. I checked with my local licensing authority to see if I was allowed to just change a fuel system and I was told it was okay; I didn’t even need an inspection. So I was off in search of an old Toyota 2wd Pickup with a 22R engine.

Nelson James in Nelson, BC, towing a Toyota with a Toyota

It didn’t take me very long to find a suitable candidate. I bought the only one that wasn’t totally rotten; unfortunately it looked like a teenager’s truck from a couple of decades ago. I figured it was worth the 5 hour drive to Castlegar, BC (right next to Nelson, BC) to get it as I got the price down to $1000 and it ran alright. It had sat for a couple of years but started right up when I looked at it. It obviously needed a master cylinder and the carb was out of whack, but that wouldn’t matter as I would toss it out right away.

At 220 000 miles (not kms) it had seen some wear and had obviously been bondo-ed and repainted, pretty decently I might add. While I do like yellow, this truck is too yellow; I dislike it when the grille and bumper get painted the same colour. Also, the bumble bee stripe on the back is a bit much. The bed was professionally coated which is probably the only reason it hasn’t completely dissolved. It came with a set of aluminum rims and winter tires on steelies as well. As far as options go, this truck does not appear to have any. Manual steering, 4 speed, rubber floor and there is no evidence of there having been a factory AM radio; there isn’t even a speaker in the dash.

The propane conversion went smoothly. I tore out the old gas fuel system, and mounted the propane tank I had bought from the local fuel conversion guy. I then plumbed the high pressure hose from the tank to the regulator mounted on the wheel well and then to the mixer on top of the old carb baseplate. While I was at it, I did the customary tune-up, covered the hole where the fuel pump used to be and removed and plugged all unnecessary emissions equipment. Propane emits 30% less pollutants so who needs emissions controls?

Once I had everything installed it was time to see if this would work. I turned the key and held it, for a long time. It fired up and ran great, albeit at very low idle (400 rpm!) due to there no longer being any fast idle mechanism. Turns out it’s normal for a propane vehicle to take a while to fire; there’s no ready supply of fuel in the mixer as it bleeds out over time. I tuned the mixer by ear, bumped up the idle and advanced the timing to take advantage of propane’s much higher 104+ octane rating. It ran great, way better than it did on gas. That probably says more about its state of tune prior to the conversion than the benefits of propane however. 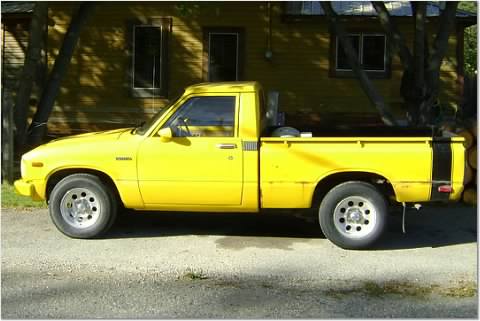 Now that I had the truck on the road I was loving it; the lowered front suspension made it fun in the corners. Manual steering cannot be matched for road feel; it felt like a slightly bigger go-cart. There’s a smile factor with a truck like this that makes it so much more appealing.

The 120 litre tank would swallow up about $90 (Cdn) worth of propane every 1000-1100 kms. Cheap to fuel, but not quite comparable to modern fuel efficient vehicles. An early 80’s small diesel would have been cheaper to fuel, but with even worse performance. The greatest impediment to better economy has been the lack of overdrive. On the highway where it spends most of its time it screams along at around 3200 rpm; another gear would definitely improve upon its 21 mpg average. The other big factor in its relative advantage is the wildly fluctuating price of fuel. Propane seems to stay at around $0.75 – $0.90/litre while gas and diesel have been as high as $1.50 and as low as $0.90/litre. About a year ago gas was briefly cheaper than propane, and it’s getting close again.

The other practical reason for owning this thing has been to keep kms down on my “good” truck. When I bought it, I had accepted a job as a train conductor 125 kms from home and used it in fair weather to get to work. I would be laid off twice before accepting another job at a mill 50 kms from home. While I was only there 6 months, I would use this beast to commute there Monday through Friday, bringing home a load of firewood at least once a week. I really wish I had a pic of it loaded to the roof with firewood or lumber, it looked pretty funny. You’ll have to settle for a pic of it loaded with tires and a canoe from the last time I moved.

Having moved on from the mill, I accepted a job as a Heavy Equipment Operator at a coal mine 250 kms from home. Since the job consisted of 4 days on shift, 4 days off, the mobile barbecue was again pressed into service navigating the mountain highways to work in good weather. Two and a half hours is about as long as anyone should be expected to spend time in such a spartan machine, but it’s still more comfortable than the machines at work.

Fast forward to today, and the truck and I have both been out of work for a year and a half. Since my medical issues keep me from operating heavy machinery and I haven’t been able to work, the truck has therefore sat in the driveway. I shuffle it around the driveway now and then to get at the other machines behind it. It just begs to go for a ride, and sometimes I can’t help but oblige. The exhaust has mostly rotted away so it’s not exactly covert but no one cares around here. It makes a good 4 wheeled wheel barrow for yard work too.

The truck and I are both at a crossroads. It needs work and I’m not sure if I need it anymore. No, the brilliant car thieves of the area have not made an effort to steal this thing; the driver’s window broke in a far stranger fashion. I grabbed something out of the passenger side, lightly closed the door and I heard a tinkling noise. I looked at the driver’s window and saw that it had shattered and the middle inch of the window had fallen out. Weird. I haven’t yet found a replacement window. I’ve bought headers and a muffler to repair the exhaust but also need to replace the brake drums, rotors, pads and shoes. As far as I can tell it’s still on its original drivetrain at about 250 000 miles so it’s generally getting pretty tired. I don’t want to sell it but have a hard time justifying it sitting in my driveway indefinitely. Especially when there’s another project hogging my garage.

That’s it, this is finally the end of my COAL series. I’d like to thank everyone for reading and for Paul for allowing me a platform to showcase all my strange machines. It’s been a really nice journey down memory lane. Cheers!