What happens to a dream deferred?

(first posted 1/3/2013)    That question, asked by the great poet Langston Hughes, was meant to reflect on the experiences of African Americans in early twentieth century America. But it applies to our featured vehicle today, and the company that created it.

“Maybe it just sags like a heavy load. Or does it explode?” The last lines of Hughes work speaks to the odd case of the C-350. At least one person involved with this particular conversion company saw the Ford lineup of the late 80’s and yearned for something more. Something much more, in fact.

Well, the employees of Centurion Vehicles were certainly grabbing life by the horns. They cobbled various parts from the F-350 and Bronco, added some magic and poof! They created a truck based SUV that could haul the whole family, a boat, and all the gear you’d need to set up camp for the entire summer. All for the price of $62,122.02 in inflation-adjusted numbers.

When you’re spending the type of money that would make a sizable down payment on a house, you’d better be getting some bang for your buck. It seems like this aftermarket concoction delivered. “A video cassette player inside the truck? Amazing!” – That’s a line that must have been said at least once by a potential C350 customer.

These guys either really loved Ford trucks, or just held a deep seated hatred for Chevy. It was probably both, but you get the point: The Classic 350 was meant to beat the Suburban at its own game.

Four engine choices, including a 7.5-liter gasoline engine and a 7.3-liter turbo-diesel. All Ford engines of course, and they warrant a sentence simply because of their massive size. Of course, GM offered a wide range of engine choices as well, but they didn’t displace as much as their Ford counterparts . Plus, the 350 had nine more inches of length than its competitor from the General. Clearly, the folks at Centurion wanted a Ford Suburban, and they made one.

And here’s why. Notice anything about their lineup? The Classic is the only one being stitched together with two separate Ford trucks. The others just spice up existing ones. A Frankenstein truck fueled by vengeance, through and through.

So what of our featured Centurion product? The rust is a clear indication that its been a resident of the northeast for most of its life. And it definitely featured the diesel – everyone heard this thing rumble by the showroom. Also, check out the gargantuan proportions of this beast! It makes the late-model Acadia look like an Equinox at best, and the Fiesta could probably fit inside the 350 without a problem. Here’s a fun fact: see that Performance White Mustang peeking out from underneath the driver side mirror of the GMC? That was my first ever sale.

So what happens when you create a luxurious truck-based SUV that could run toe-to-toe with the Chevy Suburban? You get noticed. Then you get beaten at your own game by the hand that fed you. Ford discontinued the Bronco in 1996. So what was its replacement? 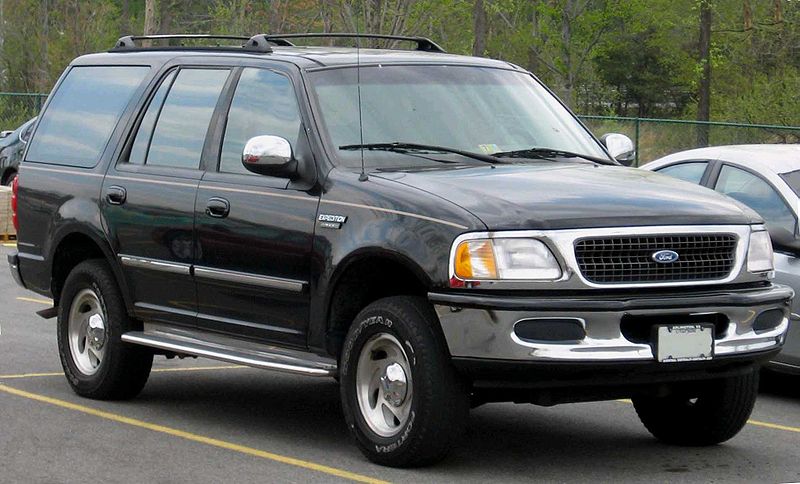 The Ford Expedition. Introduced in late 1996, it was based on the F-150 platform, and featured many of the same luxury appointments as the 350. But was it a true replacement for the 350? Its wheelbase was some twenty inches shorter, and it didn’t even offer the bigger engines included in the F-Series lineup. Video entertainment system in the rear? Nope. The Expedition didn’t have that either (initially, anyway). So if not the Expedition, then…

…the Ford Excursion. Massive by any way you look at it, even if its wheelbase was three inches shorter than the Classic 350. Still, it was longer than the Suburban, and offered the same powertrain choices as the Super Duty lineup, just like the Centurion product.

Now the Excursion wasn’t exactly well enamored by auto critics. In fact, it was slammed for being a symbol of American excess, at least until the Hummer H2 arrived. Regardless, the run of the Excursion was relatively short-lived, with the truck going out of production in 2005.

So what happened to Centurion Vehicles? They were bought out by Southern Comfort Conversions in 2006. A visit to the merged company’s website shows many spiced up Chevy trucks, but no spliced Suburban fighters. That era ended with the Clinton administration, it seems.

So will there ever be a creation like the Classic 350 in the future? It seems unlikely, as Chevy has a Suburban as good as ever, and Ford has the Expedition in both regular and extended wheelbase forms. Heck, even a Limited or Platinum F-150 in SuperCrew packaging can get the job done these days. And then there’s always the Flex…

But at least the people behind Centurion Vehicles didn’t let their dream dry up, like a raisin in the sun. Instead, they accomplished what they set out to do: make the Suburban fighter that Ford could not, at least initially. I’ll leave you with my opinion of how those employees can most likely sum up their experience building the Classic 350 by referencing the 1998 hit by the band Fastball:

“They wanted the highway, they’re happier there today”

(A quick shout out to fourdoorbronco.com. While I assert that this particular creation could be more accurately called a Proto-Excursion, I tip my hat to them, as the brochures you see above came from their site.)