Curbside Classic: 2004 Toyota Camry – I’ve Got A Symbol In My Driveway

There is absolutely no question that the events of 9/11 altered the psyche of the American public. They happened exactly a week after I started my freshman year of high school, and even though I soon went back to being more concerned about the latest Play Station 2 game and passing math class, the signs of change were all around my environment. Safety and security permeated the cultural zeitgeist for some time and, in many ways, still do.  So how does the Camry fit in?

The Camry was already a gleaming example of suburban blandness before this particular generation hit Toyota dealerships, as evidenced in 1999’s American Beauty, in which Lester Burnham’s desire to feel young again results in his decision to trade his beigemobile for a Firebird. Would that choice have seemed even more reckless in a post 9/11 society? I’m not entirely sure, but what I do know is that the vehicle in question is Ambien in automotive form. 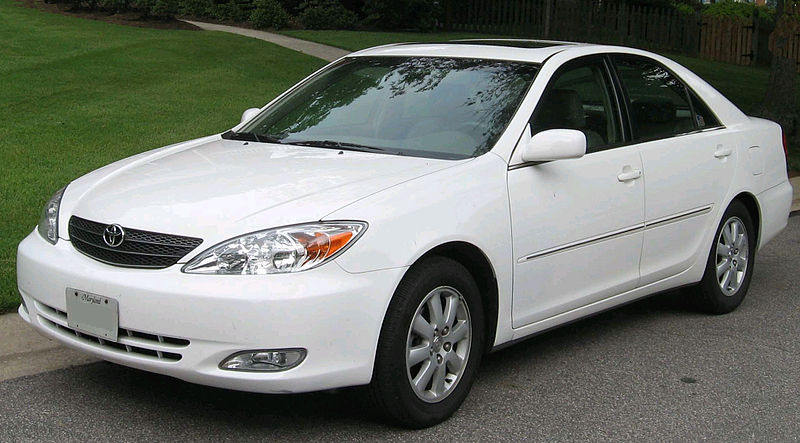 Coincidentally, in September 2001 this generation of Camry arrived, with a choice of two engines: a 2.4-liter, 157-hp four-cylinder; and a 3.0-liter V6, with 192 horses in its ranch. It was bigger in every way than its predecessor, whose horizontal headlights and taillights had been replaced with more vertical designs.

Our featured CC is the blandest of the bland: a four-cylinder LE with a beige exterior. Aside from giving it a friendly face, the Camry designers really didn’t do much at all: Its completely slab-sided doors intersect a very large greenhouse with a lightly raked windshield. Same as it ever was.

A more-angled rear window slightly differentiates the rear end from that of its ancestor, but you still can’t see the top of the trunk when backing up. I will give credit to Toyota for one thing: The chrome badges and strip above the license plate do enhance the looks quite a bit . The new “Empire Gold” plates, introduced several years ago in New York, do no such thing.

This interior pic is a bit out-of-focus, as though my cell phone realized where it was and decided to sleep through the task of trying to impart visual clarity to an extremely boring interior. All would be forgiven if this aesthetically challenged cabin made ergonomic sense, but alas, no such solace can be found there. The center stack is angled forward and away from both front occupants; from a comfortable seating position, I have to lean towards the windshield in order to reach the audio controls. In terms of material quality, only the steering wheel and shifter feel substantial; everything else neither offends nor impresses the soul.

So how does this specific transportation device operate? Pretty much, it’s just as exciting as that last sentence–in other words, it’s not very invigorating. “Keep calm and carry on”, which I believe is a popular saying, sufficiently characterizes its handling prowess. Yet it’s exactly what you want when you move out of that crowded city due to the apparently higher crime rates and poor public school system: It’s a superior people mover to replace the public transportation you’re leaving behind, and predictable every time, except when its not. Push the Camry beyond its comfort zone and grab a Xanax. You’ll need it once the understeer kicks in sooner than you thought.

But its not all bad news: The engine is silky smooth, and just as refined as some fours currently on the market nearly 10 years later. Pair it up with a soft-shifting transmission, and you’ve got a hell of a power train for navigating the local strip mall. If you were to sit in and drive the car while saying, “In this machine nothing can happen to me”,  I really couldn’t blame you. The mission statement of this Camry is to give you comfort in an insecure and unpredictable world–but it comes at a price.

The driving dynamics of the Camry are an illusion; the serenity of the Camry’s plush ride gives way when challenged. And what of that notion of reliability which calms the nerves of those averse to automobiles? In that respect, this CC has been pretty stellar; At 63,000 miles it needs new tires, and the climate control backlight is non-functional unless you punch it–but of course, you have to lean forward in order to land the blow.

So if the 2004 Camry represents the illusion of security, what is represented by its competition at the time? I’ll always defend the Taurus, even if this was pretty much its low point. The bull definitely represented the underdog: It was being dismissed by many, but in reality actually offered a superior experience versus the Camry once you sat down and really got to know it, and with a much more coherent interior. The 2002 Altima was the overconfident new kid who tries hard to impress, but you know you’re in for serious trouble once he learns the job. On the other hand, the 2004 Accord symbolized progress: It was pretty much better than all its competitors because it was going somewhere. There was still a lot of road noise, but its evolution of mid-size sedan styling did inspire some nice designs for future generations of competitors’ offerings.

So what does the Camry say about us? It was the best-selling passenger car of the 2004 model year. Does a segment leader always need to blaze a new path of glory–or can it hold the line, self assured in its status, while demanding no avarice? I’m not entirely sure, but I’m with Lester Burnham: The Camry is not for people who crave youth–both literally and figuratively.